Warning: "continue" targeting switch is equivalent to "break". Did you mean to use "continue 2"? in /home/.sites/51/site9774918/web/wordpress/wp-content/plugins/smart-slider-3/nextend/library/libraries/localization/pomo/plural-forms.php on line 224 News | | Page 2
Skip to content

At Oberpullendorf, Burgenland, a major tournament within Austria, the “18. TanzSport-Event Oberpullendorf”, took place from March 18th to 19th 2017. Some of the participants have been Severin Huemer-Kals & Anja Lena Gruber, Christoph Schmied & Vanessa Skorski and Martin & Julia Urabl.

On Sunday, March 19th, the dancing couples Christoph Schmied & Vanessa Skorski and Martin & Julia Urabl respectively missed their way into the finale by just one place. 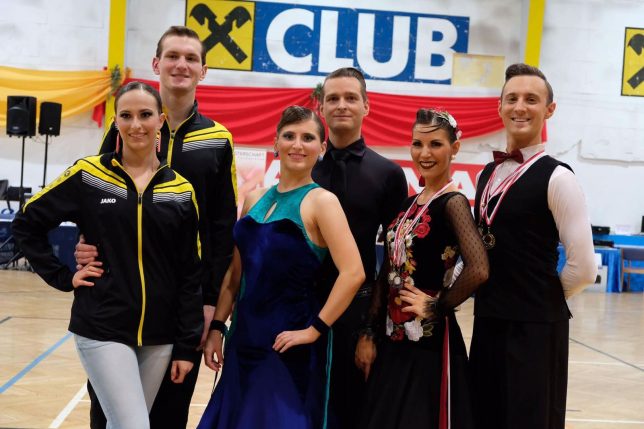 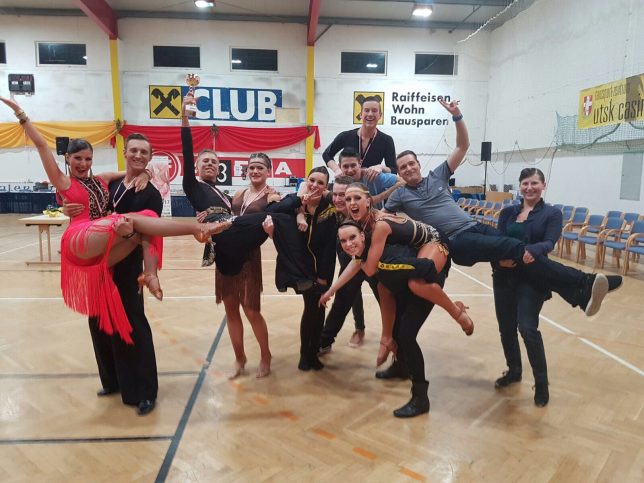 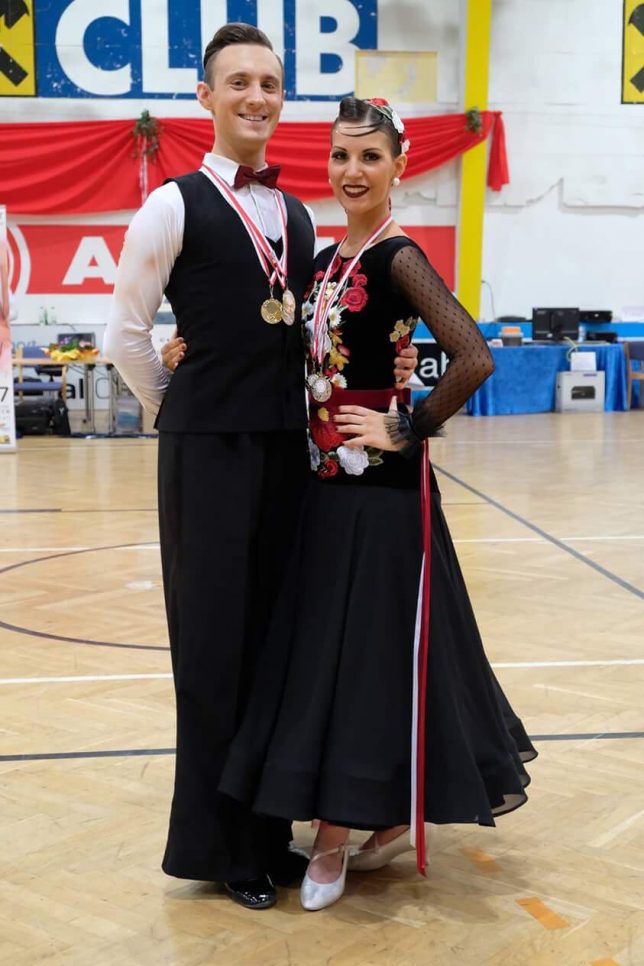 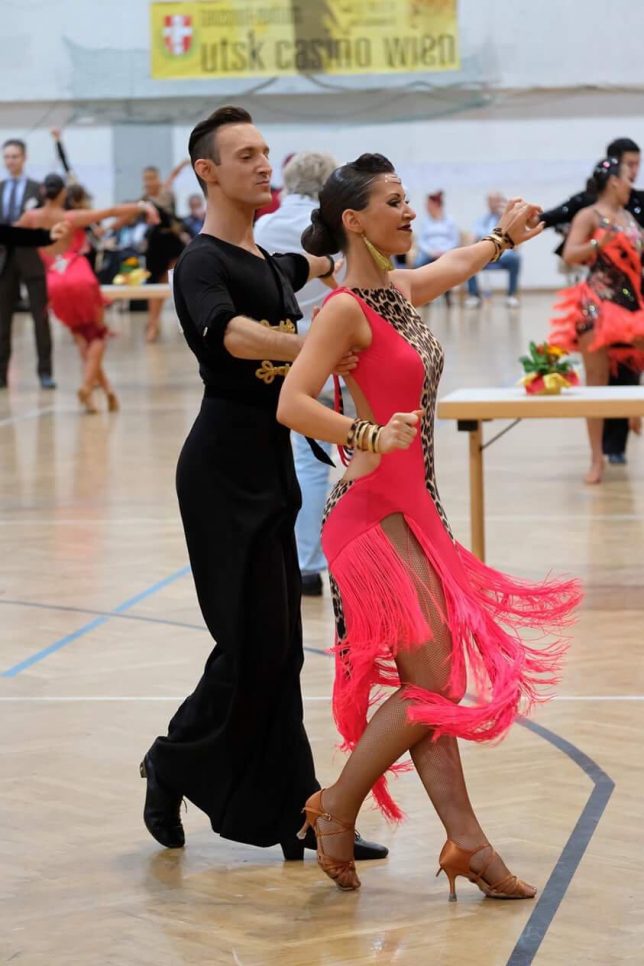 Congratulations to the dancing couples for their excellent efforts!

Next to the great results, additionally they received honors from Seiersberg’s major: Severin Huemer-Kals & Anja Lena Gruber have been awarded Styrian Champions in their class. Martin Fruhwirth & Julia Urabl received the price for the 3rd best Styrian dancing couple. 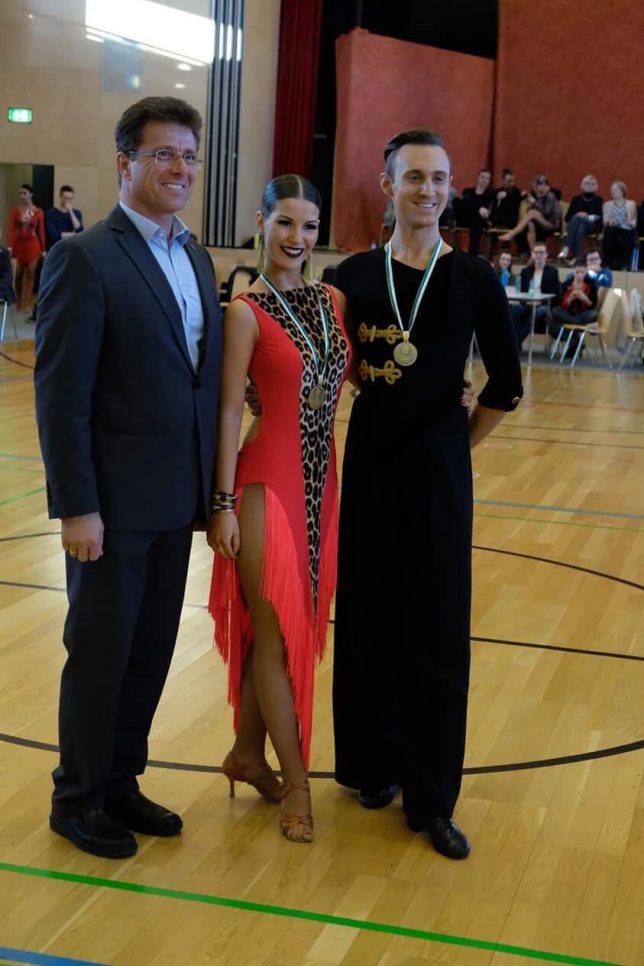 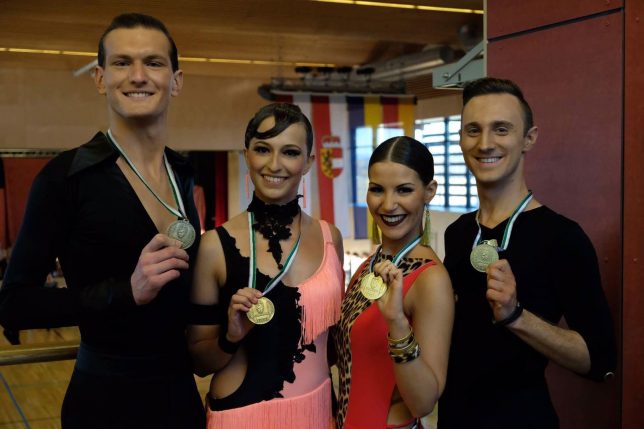 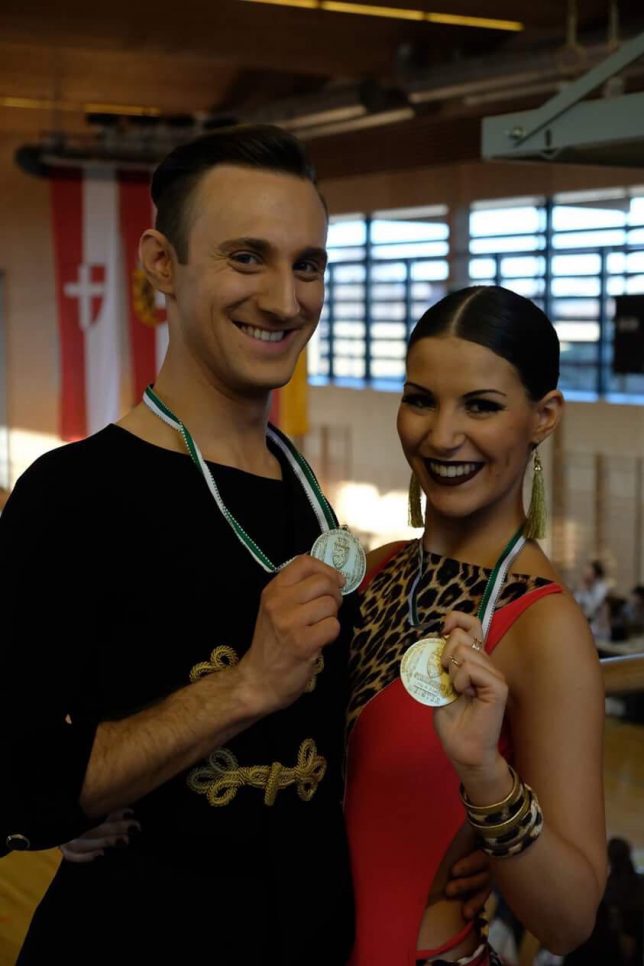 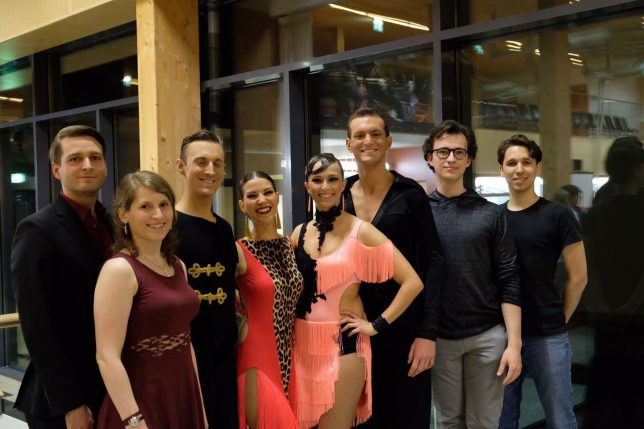 A comprehensive list of results of the tournament can also be found here:
http://tanzsportverband.weissl.com/upload/turnierberichte/08333/

In the Kultursaal Riedlingsdorf, near Oberwart in Burgenland, a valuation tournament took place on February 26th 2017. Severin Huemer-Kals & Anja Lena Gruber were amongst the competitors. Competing in Standard, General Class C, they made the 5th place! 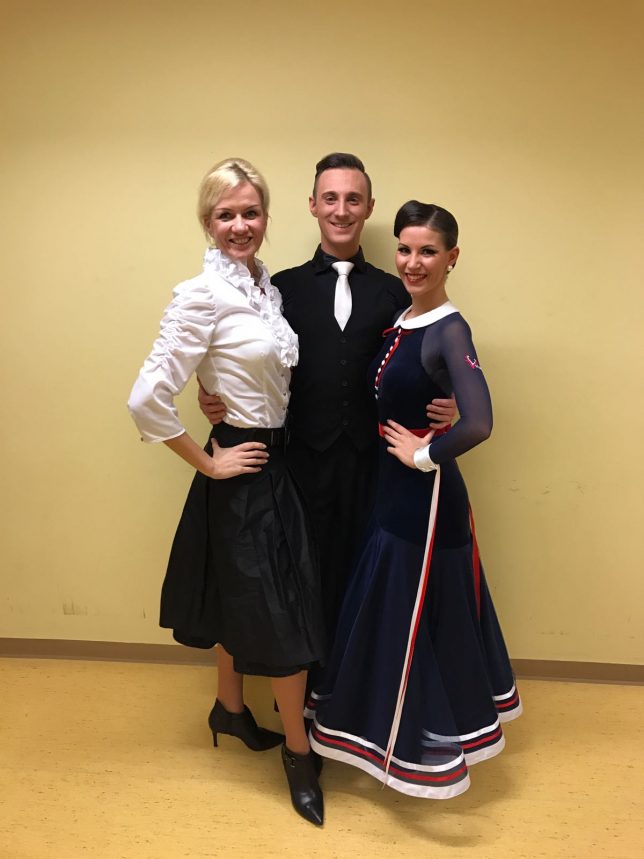 Congratulations to the both of them and also good luck further on!

A comprehensive list of results of the tournament can also be found here:
http://tanzsportverband.weissl.com/upload/turnierberichte/08319/index.htm

On December 16th, members of Siret Siilak’s dance studio came together to celebrate christmas. After a successful bowling session, the group could indulge in satisfying meals in a festive atmosphere at Zoißl’s, a traditional Austrian restaurant.

We look forward to dancing with you again in 2017 and want to wish you a merry christmas and a happy new year! 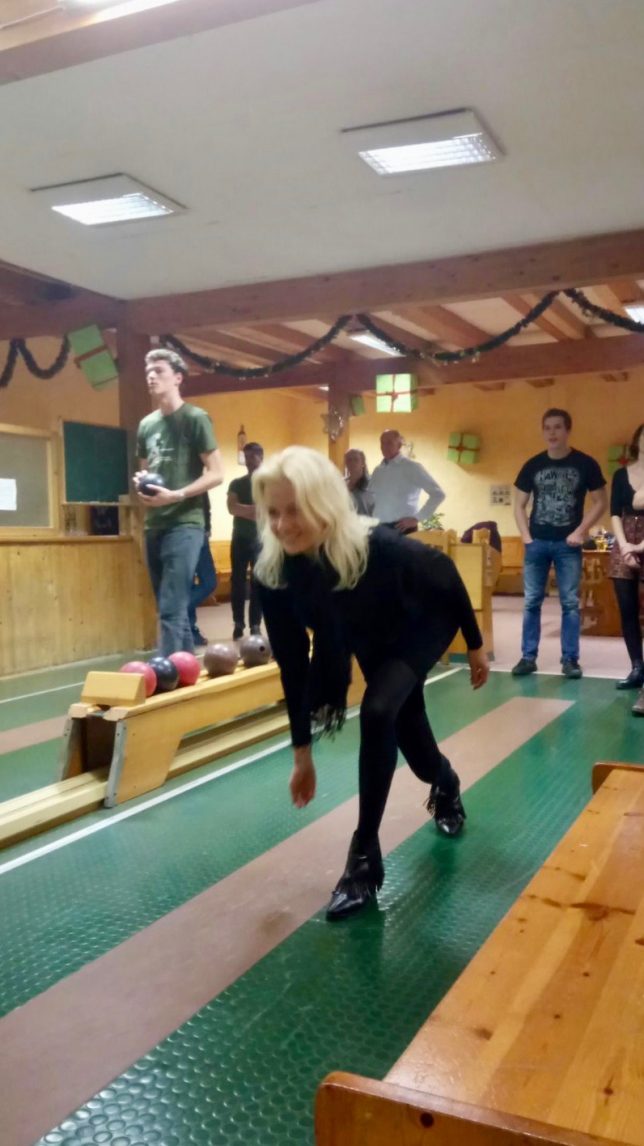 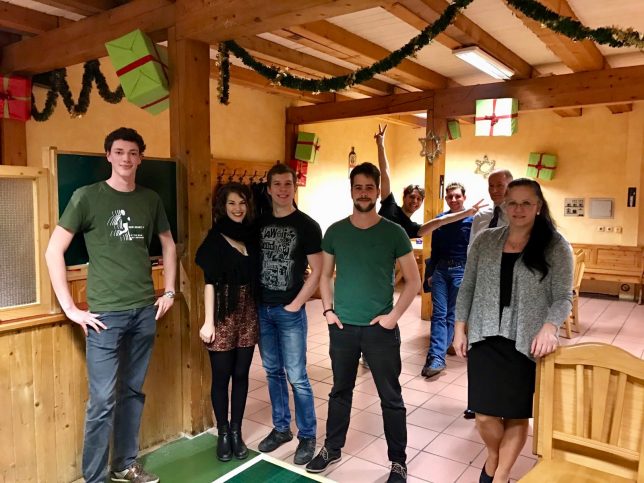 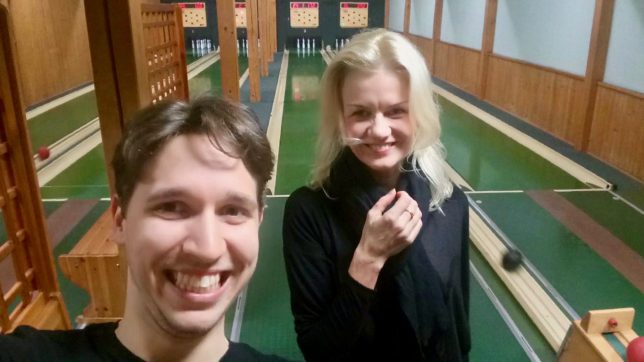 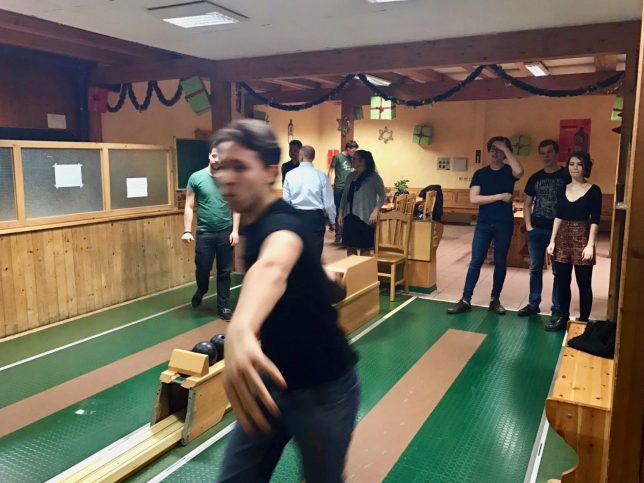 The 8-times Austrian national champion in dance sport was invited to do a short dance segment with professional dancer Willi Gabalier and Matthias Schafgassner at the closing event of this years Süd-Ost-Journal Golfcup, where many guests and golf cup participants attended.

The “Süd-Ost” golf cup took place this year from March to October for the third time, with the final competition taking place on the well-renowned golf course in Bad Gleichenberg in October. After the final competition, guests were invited to join the award ceremony at the Mailandsaal. Together with other top artists and performers such as contact-juggler Albert Tröbinger, singer Bettina Wechselberger and pianist Isabell Tropper-Hölzl, Siret Siilak and her dance partner Willi Gabalier rounded off the evening with a beautiful dance choreography. 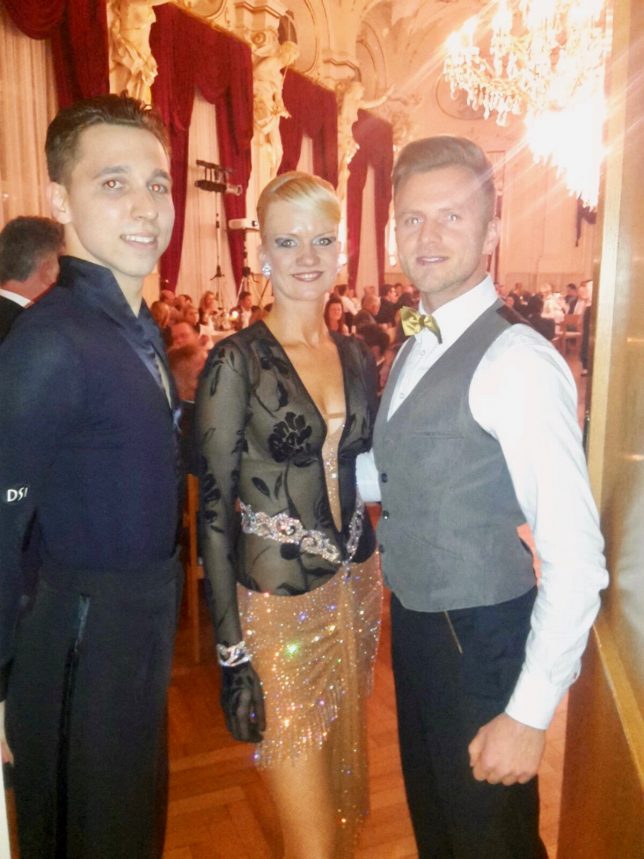 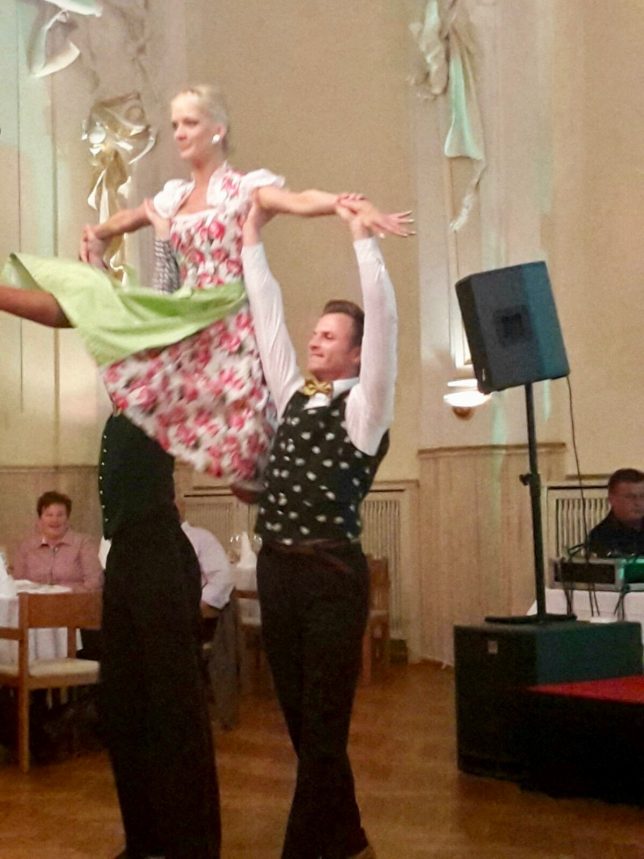 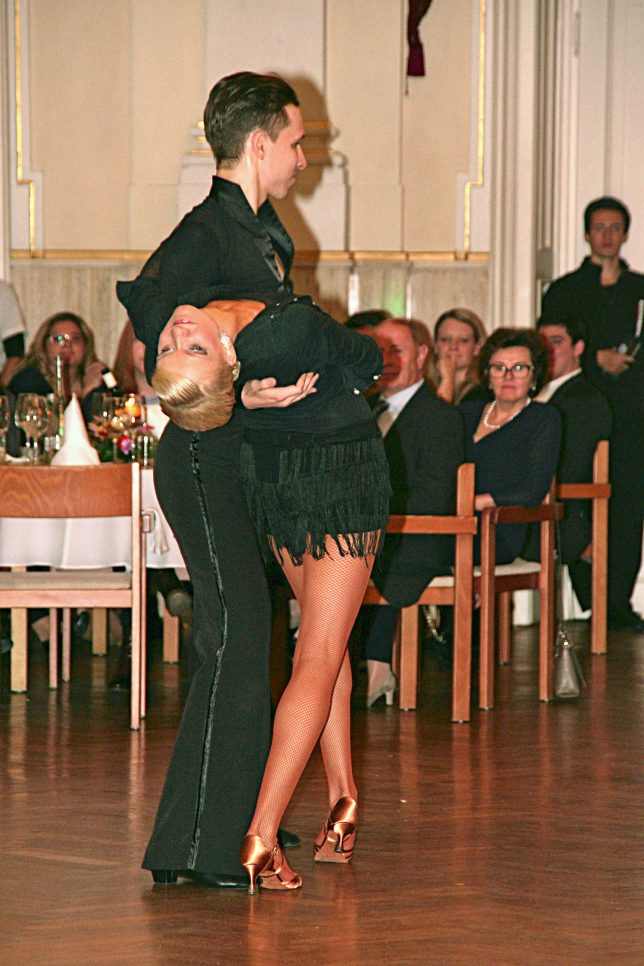 At the traditional year ending tournament of the “Gelb-Schwarz-Casino München e.V.” – the “Nikolauspokal” – Severin Huemer-Kals & Anja Lena Gruber were participating in the disciplines Standard C, Standard B and Latin C. The tournament took place in Munich on December 11th 2016.
The got their win in Standard C just a few points ahead of Michael Geißler & Katrin Hinterholzer froom Saalfelden who were head to head with the winners back in Perchtoldsdorf. 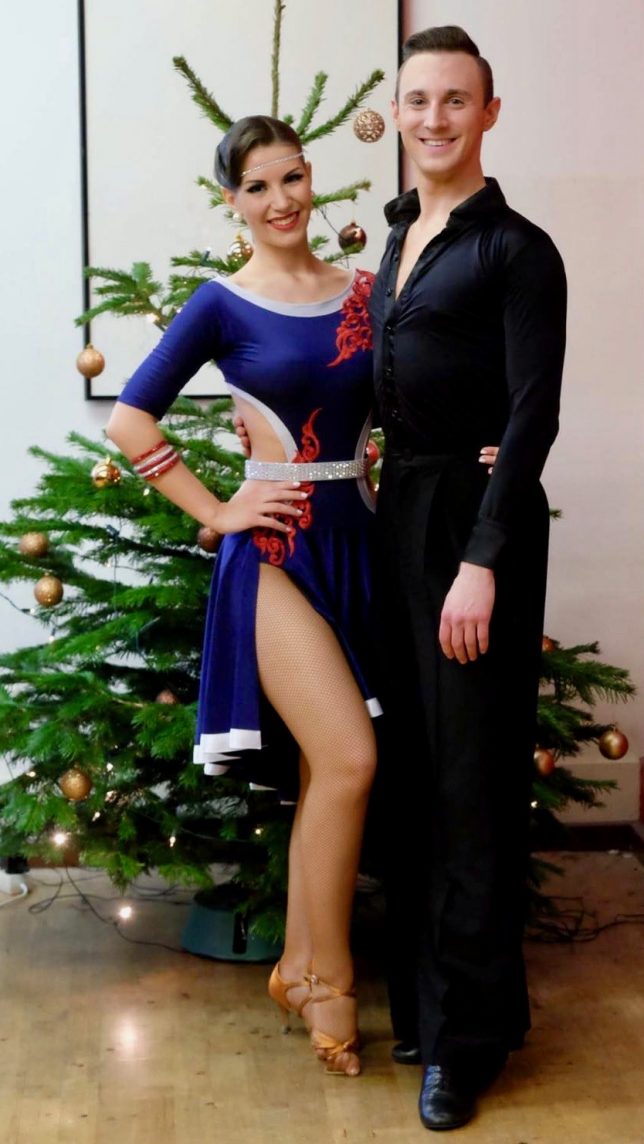 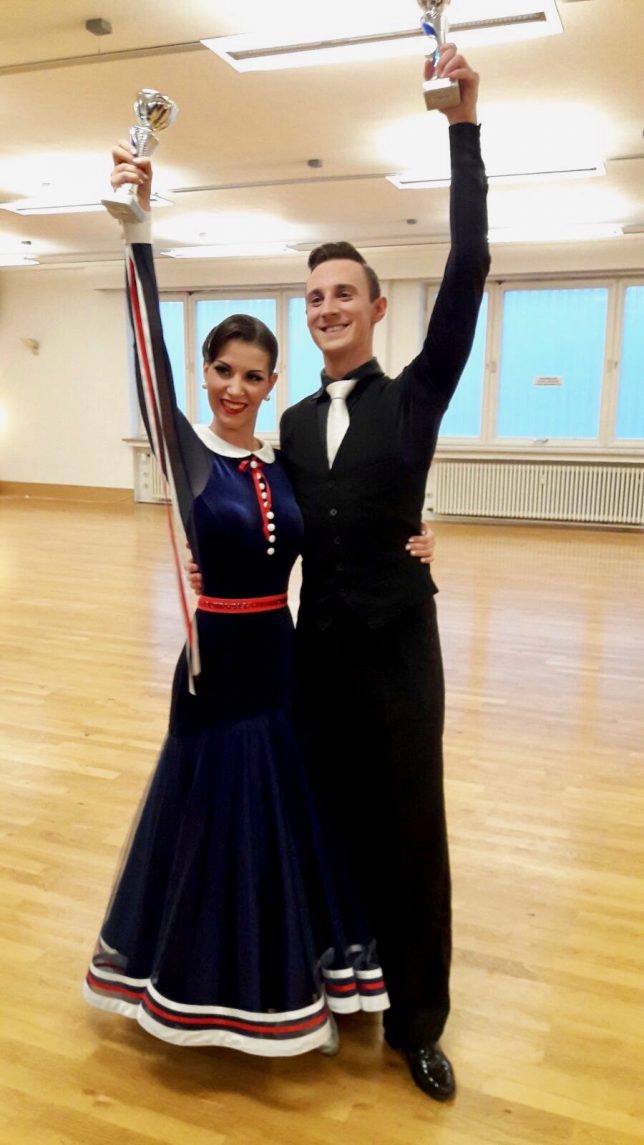 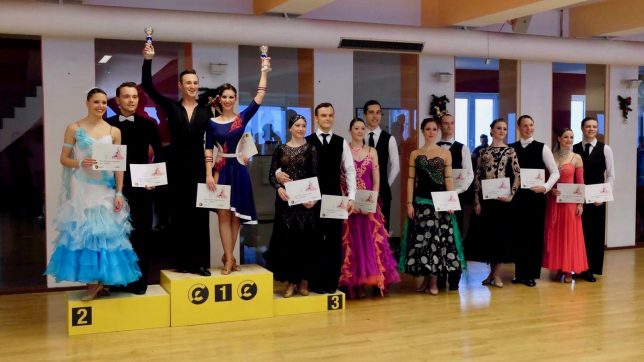 Congratulations to the successful couple to their victory but also their other great results!

A comprehensive list of results of the tournament can also be found here: http://www.gsc-muenchen.de/fileadmin/turnierergebnisse/20161211/ot_hgrcstd/index.htm

On Saturday, November 19th 2016 Siret Siilak impressed the dance audience with her performance on the dance show “Deutschland Tanzt”. The new TV show on the German channel called ProSieben is moderated by „Germany’s Next Topmodel“ winner Lena Gercke and follows a dance competition among all provinces in Germany. In the first episode of the show, 16 stars performed for their province and have been competing for first place throughout the show, using various different kinds of dance acts such as Classical, Solos and even Hip-Hop. The finals took place on November 26th, where Germany chose the winner from the last six standing stars of the show.

Siret Siilak was seen gliding over the dance floor in a waltz with semi-finalist, entertainer and moderator („Ein Kessel Buntes“ and “Wetten, dass..?“) Wolfgang Lippert in the third episode of the show. The couple was representing the province Mecklenburg-Vorpommern. Apart from Siret, there was also a second dancer from Siret’s studio that took part in the show. Matthias Schafgassner proudly won third place with his dance partner Fernanda Brandão.

The winners of this year’s “Deutschland Tanzt” finals were Kassandra Wedel from Niedersachsen and her dance partner Andy Pohl, an Austrian as well.

We would like to congratulate the proud winners and all participants of the show for their impressive performances and want to wish them all the best for their future dance careers! 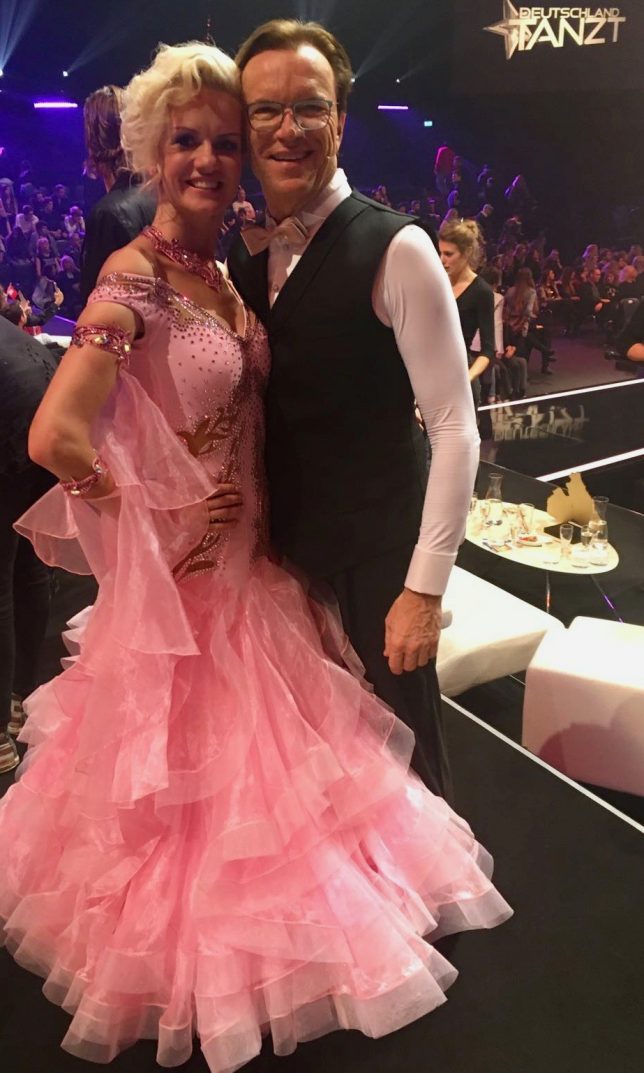 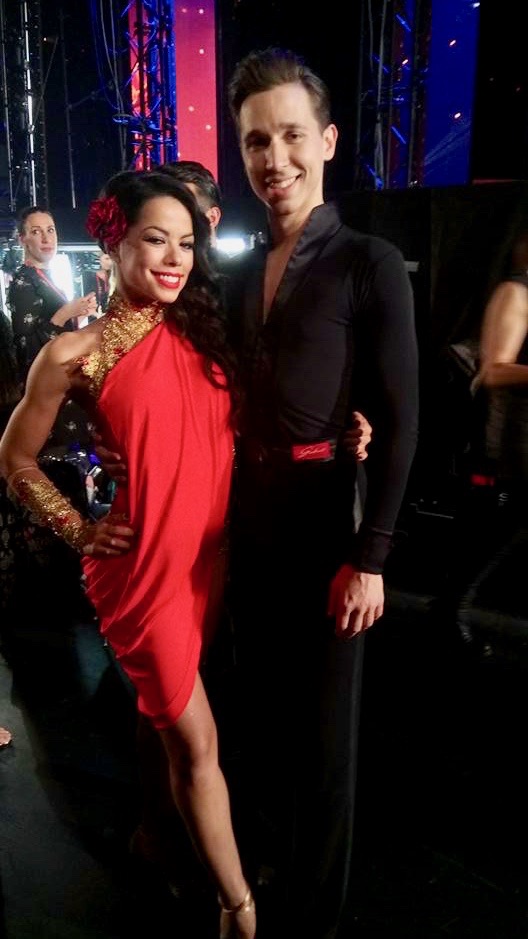 In Perchtoldsdorf, Lower Austria, dancing couples were competing at a valuation tournament on December 4th 2016. Severin Huemer-Kals & Anja Lena Gruber were amongst the competitors. 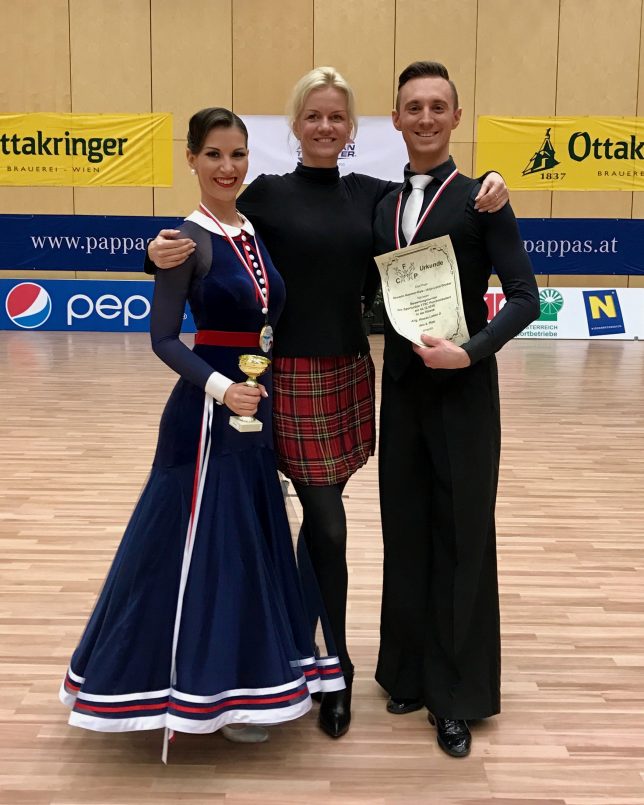 Congratulations to the dancing couple and also good luck further on!

A comprehensive list of results of the tournament can also be found here:
http://tanzsportverband.weissl.com/upload/turnierberichte/08207/index.HTM

A comprehensive list of results of the tournament can also be found here:
http://www.tanzsportverband.at/aktuelles/tk08205/wewk-int_adultsvwaltz/erg.htm 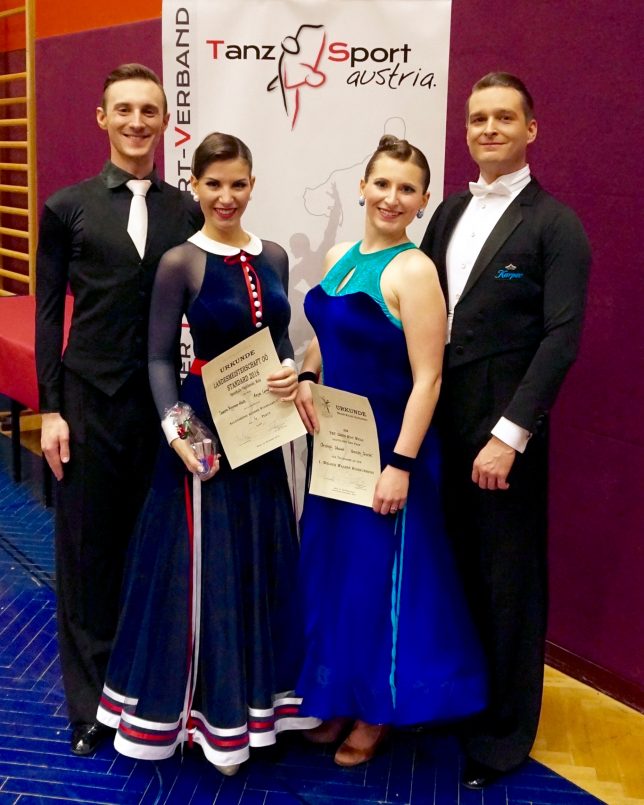 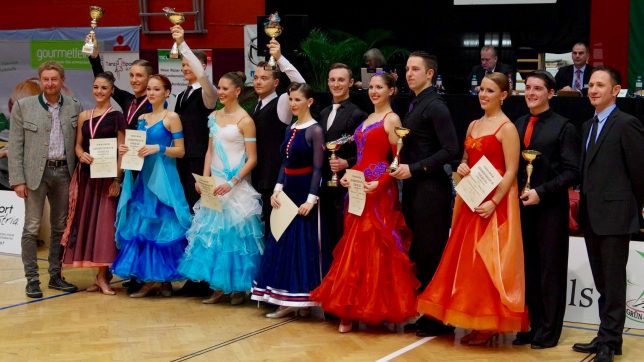 Congratulations to the participants!

A comprehensive list of results of the tournament can also be found here:
http://tanzsportverband.weissl.com/upload/turnierberichte/08205/